Israel’s nuclear chief told the International Atomic Energy Agency conference on Wednesday that Iran is “the main factor” of instability in the Middle East and that Israel will not accept Tehran getting the ‘nuclear weapon.

“The ongoing unrest in the Middle East poses a threat to peace and security worldwide and requires the attention of all member states,” said Brig. Gen. (Retired) Moshe Edri, head of Israel’s Atomic Energy Commission. “A country is the main factor of instability in the region.”

In his address to the nuclear watchdog’s annual general meeting in Vienna, Edri reminded the body that Iran “still hasn’t provided credible explanations or clarifications regarding the nature of these activities.” past, and continues to deceive the Agency and the international community regarding its clandestine nuclear activities. ”

The agency is investigating traces of uranium found at undeclared nuclear sites in Iran. Tehran has asked the IAEA to end the investigation before agreeing to re-enter the deal, but IAEA chief Rafael Grossi said in his Monday speech that his agency would not stop. investigation.

The three undeclared sites represent a key sticking point in negotiations to restore a tattered 2015 nuclear deal between Iran and world powers.

The body has lobbied for answers about the presence of nuclear material at the sites and the issue led to the passing of a resolution criticizing Iran at a June meeting of Iran’s board of governors. IAEA.

“Iran continues to develop, test and deploy long-range ballistic missiles, in direct violation of UN Security Council resolutions, and supports terrorist organizations throughout the Middle East,” Edri charged. “Iran obtaining nuclear weapons is not an option that Israel, or the world, can tolerate.”

Edri also pointed the finger at Syria, pointing out that Israel’s northern neighbor “still fails to meet its safeguards obligations for more than a decade.”

“Such a cover-up of illicit nuclear activities is a serious breach of Syria’s safeguards obligations,” Edri said. “Syria’s disrespect and lack of cooperation is extremely dangerous. The international community should support the IAEA in order to receive clear answers from Syria once and for all.

Edri also accused the Arab group of the IAEA of targeting Israel for political reasons and putting an item on the agenda every year on “Israeli nuclear capabilities”: “This unnecessary political act is in contradiction with the general positive spirit in our region.These acts are doomed to failure. 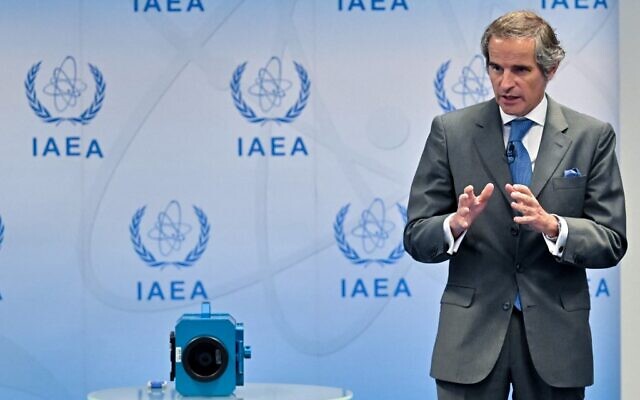 Edri reaffirmed Israel’s support for the IAEA mission, particularly in the areas of security, emergency response and technical cooperation.

The Israel Atomic Energy Commission was established by Israel’s first Prime Minister, David Ben-Gurion, in 1952, and Israel was among the founding members of the IAEA in 1957.

Israel, like India, Pakistan and North Korea, has not joined the Treaty on the Non-Proliferation of Nuclear Weapons, or NPT.

Edri’s remarks came as world powers attempt to negotiate with Iran to revive a tattered 2015 nuclear deal that aimed to prevent Iran from obtaining nuclear weapons. The so-called Joint Comprehensive Plan of Action offered Iran sanctions relief in exchange for curbs on its nuclear program to prevent it from being militarized. But the deal fell apart after the United States pulled out and reimposed sanctions, after which Iran stepped up its program, enriching uranium beyond agreed limits. 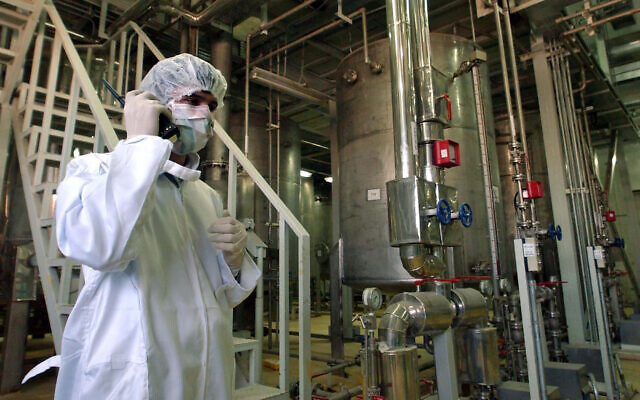 A person involved in security at the uranium conversion facility just outside the city of Isfahan, Iran, March 30, 2005. (AP Photo/Vahid Salemi, File)

Iran has asked the IAEA to end its investigation before agreeing to re-enter the deal.

Iran’s atomic energy agency chief Mohammad Eslami also signaled at the meeting on Monday that Iran was unwilling to compromise on the issue, saying the IAEA’s investigation s relied on “false and baseless information”.

Eslami insisted a revived nuclear deal should prevent ‘baseless allegations’ being made against his country and suggested that Israel placed evidence in the possession of the IAEA in an attempt to fabricate charges against Iran.

Agencies contributed to this report.

The relentless creative spirit of Israel

I’m proud to cover Israeli arts and culture for The Times of Israel. My Rhythm shows the “other side” of life here, with inspiring artists from all walks of life – musicians, painters and writers, chefs and winemakers, filmmakers and screenwriters.

The creative spirit of Israelis somehow thrives despite all the obstacles this small nation has faced. I am privileged to share these compelling stories with ToI readers and listeners, increasing your knowledge of Israel’s remarkably vibrant artistic community.

Your support, through the Times of Israel community, helps us continue to deliver surprising and awe-inspiring stories like mine to readers around the world. Are you going to join our community today?

You are a dedicated reader

We’re really glad you read X Articles from The Times of Israel over the past month.

That’s why we started The Times of Israel ten years ago – to provide discerning readers like you with must-read coverage of Israel and the Jewish world.

So now we have a request. Unlike other media, we don’t have a paywall in place. But since the journalism we do is expensive, we invite readers to whom The Times of Israel has become important to support our work by joining The Times of Israel community.

For just $6 a month, you can help support our quality journalism while benefiting from The Times of Israel WITHOUT ADVERTISINGas well as access Exclusive Content only available to members of the Times of Israel community.

Thanks,
David Horovitz, founding editor of The Times of Israel